If you’re not driving or taking the train you’ll probably be arriving in Montreal at Pierre Elliott Trudeau International Airport (YUL). Although a train from the airport to downtown is planned, it won’t be ready on time, so your options are a taxi or limo (fixed rate to downtown, $40-60, about 30 minutes), or the 747 Express Bus ($3.25, about an hour). There are also car rentals from the airport, but check with your hotel/lodging as parking downtown can be expensive and difficult. 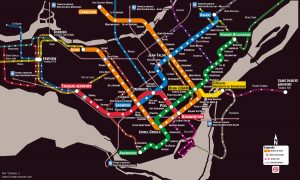 The bus and metro system in Montreal is very good and there are several fares and passes available depending on your needs and preferences. Usually in the summer kids under 12 are free when accompanied by an adult.

Another great option is the Bixi bike share, with several plans available for short-term usage (you don’t necessarily need an account, you can simply use a credit card for occasional use).

Of course, there’s also car2go (car share), Uber, taxis, and other ways of getting around. If you want to go farther, like Quebec City or Ottawa (it’s the 150th anniversary of Canada next year), we suggest the train or the bus.